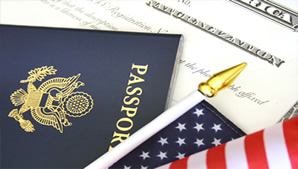 If the family member of the U.S. citizen is not an immediate relative, then the U.S. citizen may still be able to sponsor them via what is called a “family preference category.” Due to the limited number of visas available for qualifying relatives under the family preference category each year, there is usually a waiting period before an immigrant visa number becomes available.
Eligible relatives include:

Congress has limited the number of relatives who may immigrate under these categories each year so there is generally a waiting period before an immigrant visa number becomes available. Relatives of Permanent Residents who qualify as eligible relative of a U.S.

Permanent resident fall under the “family preference category” with a limited number of available visas.

A foreign national who has a permanent employment opportunity in the United States may be eligible for Permanent Residence status through employment sponsorship. This is usually a multi-step process, which requires participation of both the employer and the foreign national. Although the process of obtaining permanent resident status through employment sponsorship is complex and time consuming. Our immigration attorneys will guide you through the immigration processes to simply the burdensome process assist with the documentation requirements necessary to obtain the appropriate visa.

If this petition is approved by U.S. Citizenship and Immigration Services (USCIS), USCIS then works with the Department of State to issue a visa on an approved petition when a visa is available.

The U.S. Department of State (DOS) oversees the Diversity Immigrant Visa Program (DV Program). Every year, the DV Program makes up to 50,000 immigrant visas available to individuals from countries with low rates of immigration to the United States. The DV Program also known as the “visa lottery” is drawn randomly among all entries submitted for that year. Winners of the DV Program’s random selection immigrate through consular processing.

The purpose of the Immigrant Investor Program, also known as “EB-5 Investor” is to stimulate the U.S. economy through job creation and capital investment by foreign investors. Qualified foreign individuals who make the requisite $1,000,000, investment or at least $500,000 investment in a targeted employment area (high unemployment or rural area), in a new commercial enterprise in the United States are eligible to apply for a green card for themselves, their spouses and unmarried children under 21. The EB-5 Investor must also demonstrate that his or her new venture will create at least 10 full time jobs for American citizens or those authorized to work in the United States.

Refugee status or asylum may be granted to people who have been persecuted or fear they will be persecuted based on their race, religion, nationality, and/or membership in a particular social group or political opinion. These individuals come to the U.S. for safe harbor.

Refugee status is a form of protection that may be granted to people who are outside of the United States and are of special humanitarian concern to the United States. These individuals must demonstrate they have been persecuted or show fear of persecution based on race, religion, nationality, membership in a particular social group, or political opinion. To be considered for Refugee status, one must receive a referral to the U.S. Refugee Admissions Program (USRAP). If refugee status has been granted, you are required by law to apply for a green card (permanent residence) in the United States 1 year after being admitted as a refugee based on fulfillment of certain requirements.

Asylum status is a form of protection available to people who meet the definition of refugee, are already in the United States, and currently seeking admission at a port of entry. To qualify for asylum, an individual must request for asylum within the first year in the United States. Once asylum is granted, you may apply for a green card one year after being granted asylum. Unlike Refugee status, those granted asylum are not required to apply for a green card; however, it may be in your best interest to do so. You may no longer qualify for asylum status with the right to remain permanently in the United States if country conditions change in your home country or you no longer meet the definition of an asylee due to changed circumstances.

Thank you for your interest in Gift Nwankwo & Associates, LLC. We look forward to hearing from you. We assist clients all over Georgia, any state in the USA and internationally.